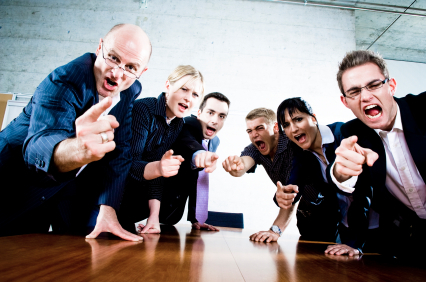 Think of your most challenging client. The one that everyone on the team complains about daily. Nearly every company has one. It’s tempting to place blame on a client that challenges your ideas, doesn’t agree with your recommendations and doesn’t “get it.”  It is so easy for an entire team to jump onto the blame train and find data points to back up their story that the client is the problem. “They are too demanding. Our client doesn’t know that they are doing. They need their hand held. They don’t appreciate what we do for them.” Do you notice that once you and your team start to blame the client, you collectively are taking your foot off of taking your 100% responsibility?

When I recently met with a team to discuss a challenging client, my approach wasn’t what they expected. Instead of asking about the client’s behavior, I asked the team to look at their behavior and how they contributed to the client being perceived as such a challenge.

Silence. Puzzled looks. They looked angry. I felt the pressure in the room build.

I imagined that they were all thinking, “This is about the client, not us.”  Then, a brave team leader acknowledged, “We gossip every time the client sends us an email questioning our work. We gather around the computer and deconstruct their email line-by-line saying how wrong the client is, and how hard it is to work with them. In fact, we can talk about a single email for days.”

“Thank you for your candor,” I said as I smiled. I then invited others to take a breath and think of ways that they blamed the client. Slowly, others began to raise their hands. “I assume negative intent with every interaction.” Another said, “I’m more focused on being right than hearing the client’s concerns or needs.”

I congratulated the team for taking their first steps of responsibility for the current situation with the client. Each piece of blame that they added acted like fuel to the fire of getting reactive and being right.  Instead of making this serious, we began to make it bigger. “I subtly belittle the client’s ideas to end the conversation.” I let them know that we knew better.

The pressure in the room began to fade. In fact, there was laughter as the list of what the team did to blame the client began to grow. This is always a significant team shift. Make the situation less serious.

Once the team owned how they contributed to the creating a challenging client, a new perspective emerged. They began to make agreements for what they would do moving forward instead of blaming the client:

What fuel do you add to your challenging clients? What new agreements could you make to take responsibility?

This article originally appeared in http://conscious.is/blogs/stop-blaming-the-client-and-start-creating-better-outcomes