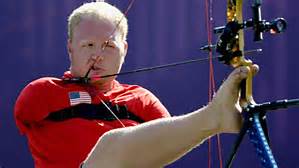 I ‍love looking for stories that inspire. I often share these stories with my wife, daughters and clients. A recent HBO sports segment on Matt Stutzman was particularly inspirational. Matt was born without arms and his birth parents gave him up for adoption. A family with three children heard about him and adopted him. They told him that he would have to do it everything for himself and adapt to society. Society would not be adapting to him. He learned how to feed himself with his feet.  How to drive a car with his feet. He had to ignore the looks from strangers. Along the way, he discovered a passion for archery.  On his own, he figured out how to shoot the bow and arrow with his feet and mouth. He has hit 89 bull eyes in 90 attempts. He is competitive in the Super Bowl of Archery, and a top ten archer in the world.  He has the Guinness world record for hitting a target over 300 yards away.  His ability to block out strangers looks (like when he eats in restaurants) and focus on the target makes him a great archer. It became his greatest asset. Matt has inspired thousands of others.  When I see these stories like Matt's I think,  "What are we all capable of?  What can we overcome?"  What obstacle can be our asset?  What inspires you and why?  and